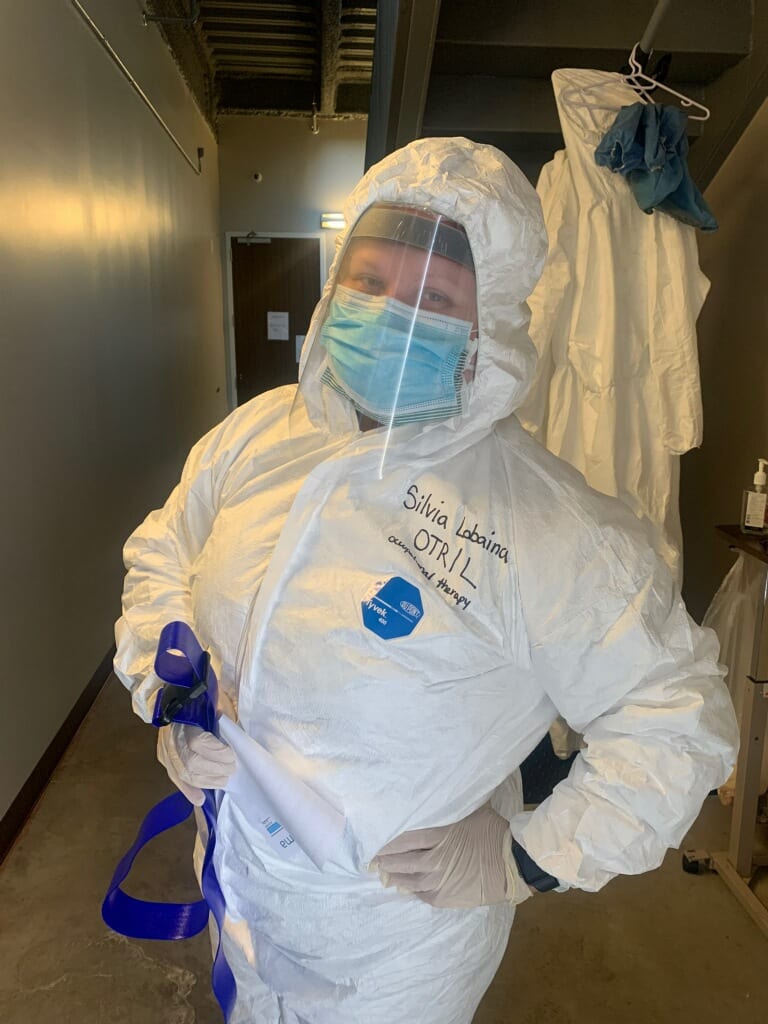 Silvia Lobaina works directly with COVID-19 patients every day. She suits up in personal protective equipment: a disposable bodysuit with a cinched...

Silvia Lobaina works directly with COVID-19 patients every day. She suits up in personal protective equipment: a disposable bodysuit with a cinched hood, gloves, mask and a face shield. Her patients are so weak from the virus, most of them lost the ability to brush their teeth or sit up in bed. “I’m doing what I’m supposed to do and what I love,” Lobaina is an occupational therapist.

The Keiser University graduate is a type of COVID-19 frontline worker that most people don’t readily think of: “We are not being heard; we are not being seen, but we are on the frontlines.” In fact, Lobaina works only with COVID-19 positive patients in a skilled nursing facility. Her patients were initially treated and quarantined in a hospital. Once stabilized, they were sent to a skilled nursing facility because of weakened muscles and lack of mobility. Patients who test positive for the virus are isolated, which means they don’t have the same access to occupational therapy, even inside skilled nursing facilities.

“These people need help. These patients need to be moved.” That’s where Lobaina steps in. She carries therapeutic exercise equipment into patient rooms and works one-on-one for an hour each day. She usually sees five patients a day. She works with them on strengthening their muscles so they can return to performing basic, daily activities. “I try my best to get them as independent as possible.”

Lobaina not only shares a connection with her patients, but she also carries a deep appreciation for the occupational therapy field. She spent a lot of time in a skilled nursing facility, as a child, after her grandfather suffered a massive stroke. For years Lobaina accompanied her grandfather to therapy sessions in a rehabilitation center. She was intrigued and remembers asking the occupational therapists lots of questions.

“Everything you do in therapy has science behind it,” Lobaina said. She realized it’s more than exercise; there is a purpose behind the movements. Lobaina learned the purpose behind the exercises after enrolling at Keiser University’s Miami campus where she earned an Associate of Science in Occupational Therapy Assistant. The university’s one-class-at-a-time and one-class-per-month schedule allowed her to continue to work as a rehab technician at an outpatient orthopedic center while obtaining her degree. After graduating she continued her education and earned a Bachelor of Science in Health Science .

Lobaina worked as a certified occupational therapist. She gained employment in travel therapy which allowed her to experience different units in hospitals and facilities on the West Coast of the country. After six years, Lobaina realized she wanted to do more for her patients. She chose to return to Keiser University, for the third time, to complete a Master of Science in Occupational Therapy from the school’s Fort Lauderdale Campus. Lobaina said because of the university’s flexible schedule, she was able to continue working and flying back and forth across the country to attend graduate school on Fridays and Saturdays. She said she also found the tuition at Keiser University much cheaper than graduate schools near her. Lobaina earned a master’s in December 2019. “I’m very proud of what I have accomplished.”

Today, the 34-year-old uses her degree providing occupational therapy to COVID-19 patients, many of whom, she says have not moved in months. Lobaina gets emotional when she thinks about her patients’ who didn’t receive occupational therapy because they were quarantined: “This is someone’s dad! This is someone’s grandfather! I think about them as if they were my parents and if they were my parent, I would want them to be moving.”

The simple objective of motion becomes a difficult undertaking when you have not moved in months. One of Lobaina’s recent most fulfilling moments with a COVID-19 patient occurred with a 64-year-old man who could not stand out of bed. After a week of working with him, he was able to walk enough to take a shower for the first time in months: “It makes me feel really good. This is what I like to do. I like to help others. This is why I do what I do.” Her goal is for all her patients to recover and be discharged, so, like her grandfather, she can see them literally walk out on their own.