Students at the Clearwater campus participated in a debate regarding the hot-button issue of human cloning. The two sides, comprised of students from English Literature and Psychology, were judged on their performance by campus leaders, including President Gina Cossey, Dean Alicia Stremming, Medical Assisting Program Director Dale Mihalko and Nursing Program Director Jesika DaSilva.

At issue was a central question: Is human cloning ethical? English Literature students, who have recently been reading and analyzing Mary Shelley’s masterpiece Frankenstein, defended the notion that it was not, while Psychology students, who have recently been studying genetics, defended the idea that cloning is indeed ethical. Students from each side had three minutes each at the lectern to prove their stance’s validity.

Students from the varying programs at the campus served as audience members, and also asked several follow-up questions after the debate was over. In the end, Dr. David Robertson’s Psychology students won with a score of 55.2, while Mr. John Davis Jr.’s English Literature students came close with a score of 54.2. The debate involved everyone on campus, and was broadly discussed across different subject areas. 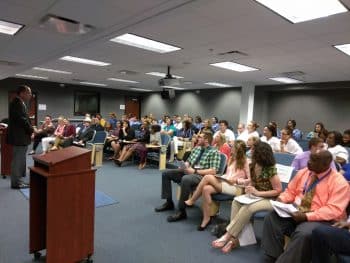