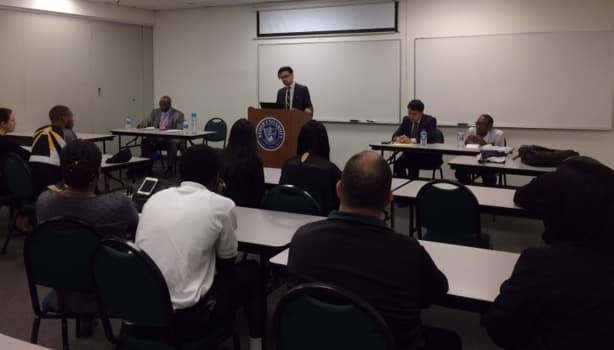 The Rollins College debate program provided an exhibition of International Debate at Keiser University's Orlando campus. Led by the coach of the...

The Rollins College debate program provided an exhibition of International Debate at Keiser University’s Orlando campus. Led by the coach of the Rollins debate program, Professor Eric Smaw, a team of four debaters presented arguments for and against one of today’s hottest topics in American politics.

In addition to Dr. Smaw and a second Rollins professor, the debaters included the debate coaches from Solbridge International Business University in South Korea and from JADE in Jamaica. Each debate team – Rollins, South Korea and Jamaica —  brought some of their student debaters to watch and participate as well as mingle with the Keiser students and faculty.

Each of the four debaters was allowed 10 minutes to make their arguments, occasionally interrupted by the opposing team interjecting questions or opposing arguments. Then the debaters took questions from the audience, followed by five-minute summary rebuttals by each team.

In addition to asking questions, the audience was encouraged to show their pleasure or disapproval to arguments being presented by shouting either “Hear, hear!” or “Shame!” At the end, the audience got to vote on which side won the debate – the debate team from South Korea and Jamaica won the audience’s vote. 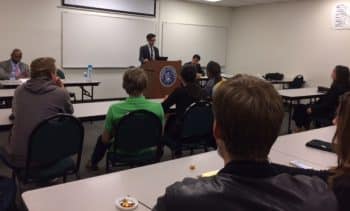