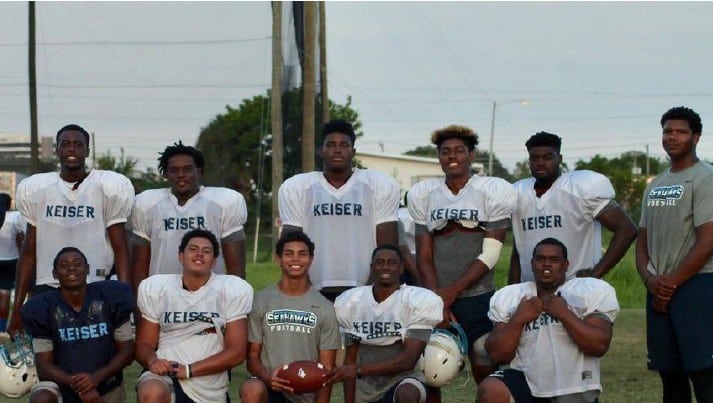 Right now, Florida Atlantic University in Boca Raton boasts the only college football team in Palm Beach County, but that is about to change.

In less than a year, the county’s collegiate gridiron landscape is going to double in size as Keiser University will be joining the fray. And the Seahawks will do so with a solid nucleus of players from the Western Communities area.

Back on Sept. 16, when the world of college football was busy with tailgating and regular season games, the West Palm Beach-based school hosted its own version of a football ‘open house.’

There, area football fans and the media were invited to be eyewitnesses to the Seahawks’ first practice session in pads.

Keiser University head football coach Doug Socha said the practice served to lay the foundation for what is expected in the future. “We try to teach good practice habits,” Socha said. “We teach hard work, teach the demands of the sport and explain sacrifice.”

Socha likes the talent base in the Western Communities, and he plans to come back looking for more players. “That area has been good to us,” Socha continued. “We plan to continue our recruiting efforts in that part of the county.”

After a year of practicing, running, blocking, tackling and lifting weights, the majority of the Keiser University players will be new to the college football experience. Current freshman will use this year as their redshirt year.

“I expect that we will dress 70-80 first-time college football players,” said Socha, who has also coached football at the high school and professional levels.

When asked what keeps the players motivated since Keiser won’t have an official game until late next August, Socha said it’s internal competition. “With 121 players on the roster right now, we have enough numbers at each position to keep it competitive,” Socha said.

While next year’s schedule has not been released, Socha did say that the Seahawks plan to open the season at home on Saturday, Aug. 26. The kickoff time, the exact location of the game and the opposition have yet to be determined.

For the rest of this season, the Seahawks’ players will attend class and continue to practice with and against one another as they look forward to their first game next year. According to Socha, the team practices outside three days a week on the practice field and lifts weights another three days a week.